The next generation of Nvidia’s beastly GPUs has arrived in the form of the GeForce 30 series. These massively powerful chips are based on Samsung’s 8nm process and promise to take PC gaming to the next level, and they’ve arrived at just the time when Microsoft and Sony were about to release their Xbox Series X and PS5 consoles, which look severely underpowered in front of these cards. These new 30 series GPUs from Nvidia are based on the Ampere architecture, which was already showcased by the company earlier this year, albeit for an ultra-powerful AI chip.

Their arrival on the GeForce RTX range means gamers will be able to easily enjoy 60fps gaming at whopping 8K resolutions. There are three GPUs to look forward, as you might know already. The base model is the GeForce RTX 3070, which is the base model and still promises to be faster than the RTX 2080 Ti. Then there’s the flagship GeForce RTX 3080 that’s twice as fast as its predecessor and the beastly new GeForce RTX 3090, which could have been passed off as a Titan edition, but that’s not the case.

Nvidia has promised a 2x increase in performance over the RTX 20 series and an up to 1.9x increase in energy efficiency. Just thinking about how powerful the RTX 2070 and RTX 2080 already are, leaves us speechless about the capabilities of these new GPUs. This new series adopts second-gen RT cores as well as new streaming multiprocessors. Third-gen Tensor cores also make their way into them, apart from GDDR6X video memory of up to 24GB. Nvidia has made them the first graphics cards in the world to offer HDMI 2.1 connectivity, allowing for 8K video playback and gaming. Plus, support the AV1 codec, which delivers HDR visuals while taking up significantly less bandwidth.

These being second-gen RTX GPUs, an updated ray-tracing system will indeed be present on them. With ray-tracing, the realism of shadows, reflections, and lighting in games has dramatically improved and is all set to make its way into consoles with this year’s Sony and Microsoft machines. There are currently hundreds of RTX games in development, while old ones like Minecraft, Control and Wolfenstein 3D: Youngblood have been granted support as well. 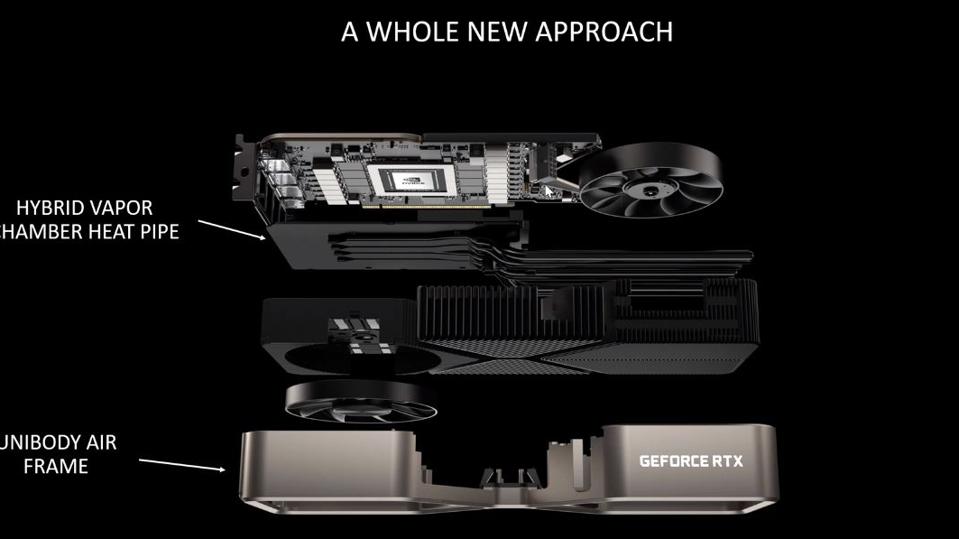 This top-of-the-line chip is being touted as the ‘BFGPU’ or Big Ferocious GPU by Nvidia. No wonder it’s rated for 8K gaming at 60fps. It ships with the power of 10,496 CUDA cores, combined with a boost clock of 1.7GHz and 24GB of GDDR6X memory. 8K HDR ShadowPlay support has also been added to this GPU by its makers. The card will occupy three slots on the motherboard and will come with a silencer aimed at suppressing its noise to make it 10 times quieter than existing Titan RTX graphics card.

If you really want to get an idea of how fast the RTX 3090 will be, Nvidia says it’ll be 50 percent faster than the Titan RTX. That’s a lot of power to be packed into one GPU. You will require a 750-watt power supply on your PC in order to get the card running, and moreover, around 350 watts of power will be gobbled up by this card itself. So just in case money is not a barrier for you and you have an 8K monitor lying around in your house for those ultra-crispy visuals, September 24 is when it will be hitting stores at $1,499.

This is the more reasonably priced yet all-encompassing model that most gamers will be looking forward to. It’s rated for the 4K-60fps output that most gamers are looking for. Nvidia says that it’s up to two times faster than the RTX 2080 thanks to its use of 8,704 CUDA cores, combined with a 1.71GHz boost clock. 10GB of GDDR6X memory has made its way inside this chip, along with an updated thermal design that’s aimed at improving airflow and overcoming the complaints that users of its predecessors have. In fact, the dual-fan setup promises a 55 per cent improvement in the airflow.

Like the other GPUs in the RTX 30 range, this one too uses a 12-pin connector, which saves more space dual 8-pin connectors. This is also way smaller than using two traditional eight-pin connectors. The Founders Edition cards will be sold by Nvidia along with an adaptor that’s compatible with eight-pin cables. The GeForce RTX 3080 will be released on September 17 with a price tag of $699.

The company has really turned things around with this one. That’s because the RTX 3070 is priced at just $499, yet it happens to be more powerful than the RTX 2080, which is selling at $699 right now. It’s also 60 per cent faster than the original RTX 2070. It’s hence safe to say that the RTX 2080 and 2070 will become obsolete very quickly and you can also expect a major price drop as the final units get snapped up from the market.

It makes use of 5,888 CUDA cores, combined with a 1.71Ghz boost clock. Nvidia has blessed it with 8GB of GDDR6 memory as well, making it worthy of running games at 4K and 1440p resolutions. Also, onboard the RTX 3070 is a similar cooling solution to that of the RTX 3080. This card will be released as early as this October at $499.

All major Nvidia partners have already announced their own versions of these three GPUs. These include MSI, Gigabyte, Zotac and ASUS. They will be adding their own enhancements and knick-knacks as usual, so it’s better to take a look at all of them before deciding about your final purchase.

Must haves for MacBook and MacBook Pro owners

AMD RX Vega runs out of stock in 12 seconds.

Project IGI: We’re Going In is in development

Gigabyte AMD B350 AM4 Motherboard

Everything we know: Far Cry 5